Maldevta is a popular picnic spot near Dehra Dun. Thirst overtook us while trekking to Maldevta and we decided to ask for some water at a small thatched hut about a eight hundred scrubby hundred yards from the canal we were following. A dusky, well built man wearing a skimpy loin cloth emerged from the dark interior of the hut. Why, of course, we could have water, he answered. He didn’t have that much left, just a couple of glasses, as he’d just finished cooking, but we were most welcome to it. Was this his permanent residence, we asked him conversationally? Oh no, he had no fixed place of stay. There was a cremation ground just a stone’s thrown away, and he’d built this hut as he had been waiting for a lawaris body (homeless person’s body which is generally cremated by a philanthropic organization or trust). As luck would have it, after waiting for some three months, such a body had arrived just yesterday, and he’d been able, in exchange for a good luck charm, to obtain the head of the dead man. In fact, he’d almost run out of water as he had used most of it for cooking the dead man’s brain with some rice. He brought out a blackened pot and showed us the contents. He’d already had one portion of it, and would have to space out eating the cooked brain and rice over the next three days. Repelled, chilled, yet curious, we asked him who he was.

He was an aghori, he said, and Calcutta was his birthplace. After early initiation when he was just nine years old into Tantric Kali worship, he’d moved into other deeper sadhnas (disciplines), but always, it was with the forces of the dark. The rules and demands of the search for power in which he was now engaged ordained that he had to eat at least one human brain annually.

Already, he had acquired the ability of divining the future. He could actually show us our future, in case we were interested. Why didn’t we come in ? Fascinated yet afraid that at this isolated spot we might end up becoming his annual meal, we left somewhat hastily, forgetting all our lessons in politeness.

Over the next few days, I couldn’t get the aghori out of my mind. When a brigadier and his wife came to seek a reading from the cards as they were in deep trouble with a court martial looming on the horizon, it gave me the opportunity to go back to the aghori, with the anxious brigadier and his wife in tow. After all, he had said he could show one the future. What better way of testing the claim ?

He was still there, at the peak of his powers, he informed us, as he’d recently consumed the human brain. This time, we entered his hut and our eyes soon became accustomed to the dimness. The aghori requested us to sit, and as we sat cross-legged on the earthern floor, placed a lota (container) of water before us. “Look into the water” he commanded. And in the water, we saw the brigadier, older, dressed in civilian clothes. After several sequences, we saw the brigadier with the Supreme Court clearly visible in the background, and he was wearing a dark blue suit and distributing sweets to a group of people who were with him.

Some months after this amazing incident, the brigadier wanted to take a friend to meet the aghori, but when we reached there we found the hut in a sad state : it was just a bundle of grass and straw and twigs strewn on the ground. Enquiries at the cremation ground revealed that the aghori had been driven away by irate residents of Raipur, a nearby suburb.

Seven years passed with only occasional meetings with the brigadier, who was no longer in active service and was fighting his case in the civil courts. One day I received a message from him. The Supreme Court was to give the verdict on his case. And when I went on the appointed day, apart from other settings, there, outside the imposing Supreme Court building, was the Brigadier, dressed in a dark blue suit, distributing sweets just as he had been seven years ago in the lota of water the cannibal aghori had placed before us. 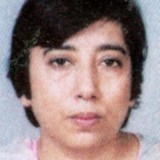 Veenu Sandal is a well-known Tarot card reader and an occultist. Gifted with unusual perception, she has had numerous first hand experiences of the unnatural kind. Her stories indicate, rather emphasise, the existence of a subtler finer, perhaps more potent, level of existence within our physical ambience and in our close proximity. The readers would find her stories interesting.